The first settlers arrived in the immediate area in the 1860’s. Originally the town was located a half mile northeast of the present location. It was laid on a hill overlooking the river and was known at the time as Junction Hills. In the middle of 1870 it was determined that it was not a good location for town expansion because of the threat of floods on the river. The new location was platted in 1870 and was incorporated in 1884. The town was named after one of the founder’s parents birthplace, the Malvern Hills of Scotland. However when the charter was returned, the name was misspelled and changed to Melvern. 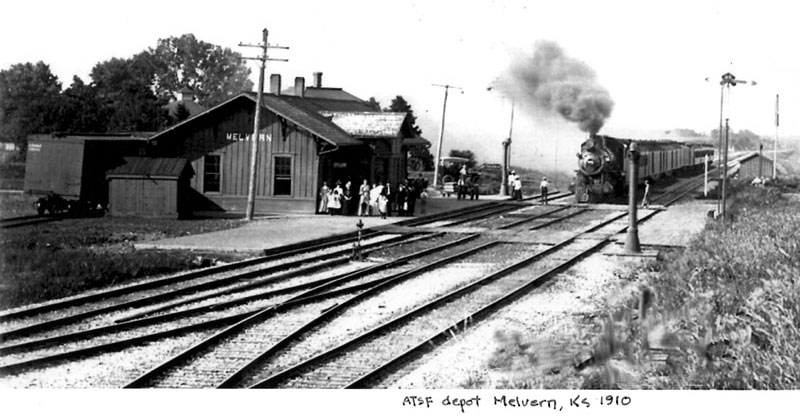 Melvern’s growth was stymied by lack of a railroad and the town declined in the 1870’s. In 1884 the Kansas City and Emporia Railroad finally built lines through Melvern and the town flourished. The area has a rich vein of very hard stone that has been mined and shipped for years on the railroad. Cattle, grain and even clams from the river were also shipped from the area. In the early 1900’s the railroad hand cut a lower rail bed and constructed an impressive steel bridge that still spans the existing double track that handles over 80 trains daily for the BNSF Railroad. In 1970 a freight train derailed and two tanker cars overturned and exploded. Several people were seriously injured and a number of buildings close to the track burned.

In 1868 the first school was held in a log cabin close to the river north of the present school. A school house was built in 1870 from heavy timbers and stone from nearby quarries. That building also served as a town meeting place and several denominations held church services there on Sundays. Today the school house is a private residence.

Many businesses have come and gone over the last century. In the late 1800’s Melvern was home to four doctors, four lawyers, three general stores, four restaurants, three hotels, three drug stores, three livery stables, two hardware stores, a bank, an undertaker, a broom factory and a newspaper. In the early 1920’s there was a cheese factory and a candy and popcorn factory which made Jolly Time Popcorn.

A number of organizations have come and gone through the years which include the Ku Klux Klan, Eastern Star, Job’s Daughters, The Grange, Jaycees, Jaycee Jaynes, Lion’s Club, I.O.O.F., Rebeccas, Woodmans, Royal Neighbors, Priscilla to name a few. In recent years Tequa Aid, and Entre Nous have disbanded.

In 1974 the United States Army Corps of Engineers built a mile long earthen dam four miles west of Melvern to create Melvern Lake. This has decreased flooding in the river basin below. The Hallmark movie series Sarah Plain and Tall was filmed just a few miles north of the lake.

Today Melvern is still made up of descendants of many generations of working class people. The farming and midwest values have carried on through the years. The community is committed to working together with a vision to use its history and core values to build the future.